What is a Dragon Boat?

Boats that looks like dragons!!! How cool is that? 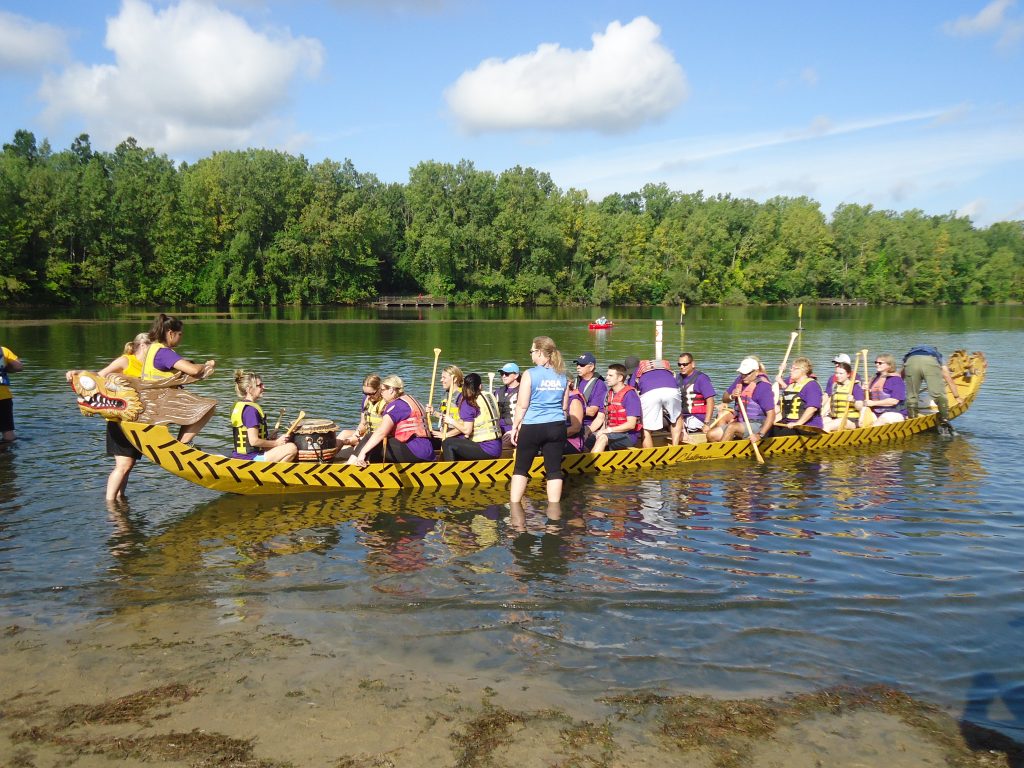 They are powered by human paddlers, but after being in one for the better part of two-days, I am convinced that they also possess some sort of mystical dragon like strength. Seriously. More on that later.

You can check out more information about the history of dragon boats and the sport of racing them at the American Dragon Boat Association (ABDA).

My only complaint is that the little metal bar that I had to sit on could have been just a teensy bit wider. However, the strip of bruise I am sporting across my rump does serve as a cool battle wound of sorts. No, I’m not going to show it off.

In a bit I explain what the race is actually like. First, I feel I should tell you WHY I did this in the first place. 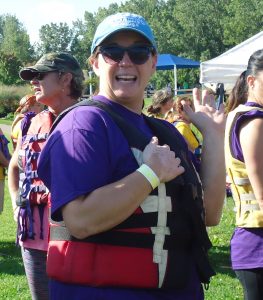 How I Ended Up in a Dragon Boat

I joined the Board of the Greater Lansing Women’s Center in the Spring of 2016. A couple of years ago the Center took over the Capital City Dragon Boat Races and it has become one of our biggest fundraising events.

Many of the teams are funded by corporate sponsors, but others are formed by families and groups of friends who want to support the center and do something fun and sort of sporty! If you just want to paddle but don’t have a whole team you can still join. We’ll find a spot for you!

We rent the boats and the ADBA provides helpers, instructors, and capable sterns (thank goodness)!

If the paddling sounds hard, it’s even more work putting on an event of this size. Cindi Alwood, the Women’s Center Director, is an amazing leader. Her story is really inspiring about how she founded the center and why she is so passionate about it. You can learn more here.

A big round of applause and thank yous also go to the volunteers, interns and others who just generally want to help out and see what all the drumming and splashing is about.

Ok, so let’s find out what it is actually like to be in a boat and part of this really crazy and unique experience.

What is a Dragon Boat Race?

It’s pretty much like it sounds. The following people are in the boat: 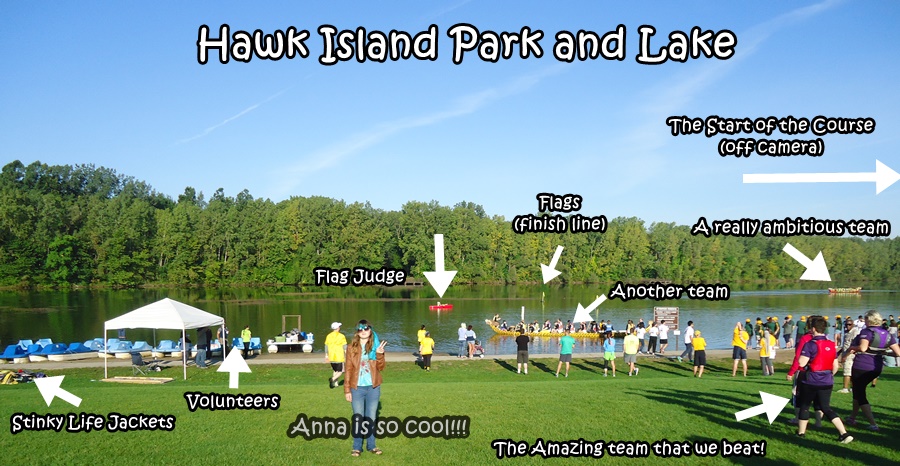 This year the race was held at Lansing’s Hawk Island Park. We had a really beautiful lake to race on and a nice beach to load and unload the boats. It’s kind of shallow though, so we did have to wade into the water up to about our knees. There is also a really big grassy lawn area where each team sets up a tent, chairs, decorations, and lots of food. I think I was pretty much eating when I wasn’t paddling.

Each team was given an hour on Saturday to practice and figure out what the heck we were doing. My team’s name is “Just Row With It” and is captained by my fellow Board member, Cheri DeClercq, and a bunch of her friends and family. It was really nice to be part of their team and they were all really friendly and fun. It made for a great time!

What are we doing?

It took us awhile to figure out who was going to sit where. We also had to pick a partner that was about the same size as ourselves to sit next. My partner, Patty, was awesome. She was a great cheerleader and paddled like her life depended on it! 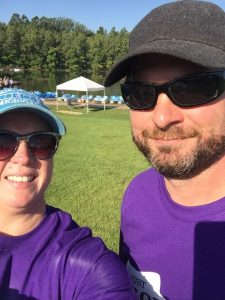 A few people weren’t there for the practice and we were short one paddler. I volunteered my husband, Chris, even though he didn’t know it yet. It’s ok! He was fine with it and had a blast.

Oh, and one more thing–it was POURING down rain that morning. We didn’t really mind because we were already wet, and it wasn’t very cold. But it was raining pretty hard. We are convinced that this obstacle played a very significant and positive role the next day.

We all met back at the park at 7:30am and set up camp. There was a group tai chi workout for all the teams and then the traditional Awakening the Dragons ceremony. Two drummers beat a slow rhythm that got faster and faster until a series of fireworks went off to “awaken” the dragons and signal the start of the races. It was pretty cool, and startling because I was not expecting the loud fireworks. I was definitely awake and ready to paddle.

When we rowed and everyone was doing what they were suppose to be doing it worked like a machine. I actually felt the boat lift out of the water and propel forward, as if an actual boat engine was powering us and not just 18 pistons of shoulders going like mad. It truly was magically–this is the mystical dragon-like strength I mentioned early. I think we all had a little bit of it in us that day.

The flip side of that is when we weren’t all in sync it was not magical and we could tell when that was the case too. But let’s not spend anymore time talking about that.

Each team raced against one other team in the time trials. We started at the far end of the lake and raced back toward the beach to grab the flag. We did this twice. Once on the inside lane and once on the outside lane.

The inside lane was shallower and had a lot seaweed in it so it was hard to row through. So it was only fair that we had to do it twice in both lanes. Both of our times were added together and then we were put into three categories. Fast, Faster, and Fastest.

Our team made it into the fastest group! Awesome!

We were the slowest of the fast group. Uh Oh!

Overall, we all thought this was pretty remarkable considering none of us had ever done this before and we really still didn’t know what we were doing.

JUST ROW WITH IT!

It was time to race. There were 4 teams in our bracket so we raced twice more. Again, each race consisted of up and down the lake twice.

The last team we raced was really professional looking. They had embroidered team shirts and matching life jackets (instead of the smelly rented ones we wore). They had chants. They were in sync. They had obviously done this before. We were intimidated.

We were the first boat down to the start so we picked the inside lane. We figured it was better to get the hard lane done first. We lost. By what seemed like a lot.

The second time down the lake was easier (no seaweed). We won. We felt good. We cheered. We held our paddles above our heads and screamed “Just Row With It!!!!!”

We had to wait for a little while to find out if we placed. Our two times were added together and then compared to the times of the other 3 teams. We would either go home with a bronze medal or go home with nothing. But that was ok, we had more snacks to eat. Cheri, our captain, rallied us by saying, “In my mind we’ve already won. We made it to the top bracket.”  Yep!

To all of our amazement we got 3RD PLACE!!!

We got bronze medals and t-shirts and won 3rd place out of 12 teams and we had never done this before. Not too bad!!

Just imagine how we will be next year!!! 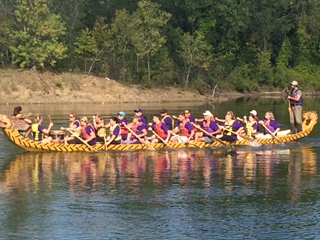